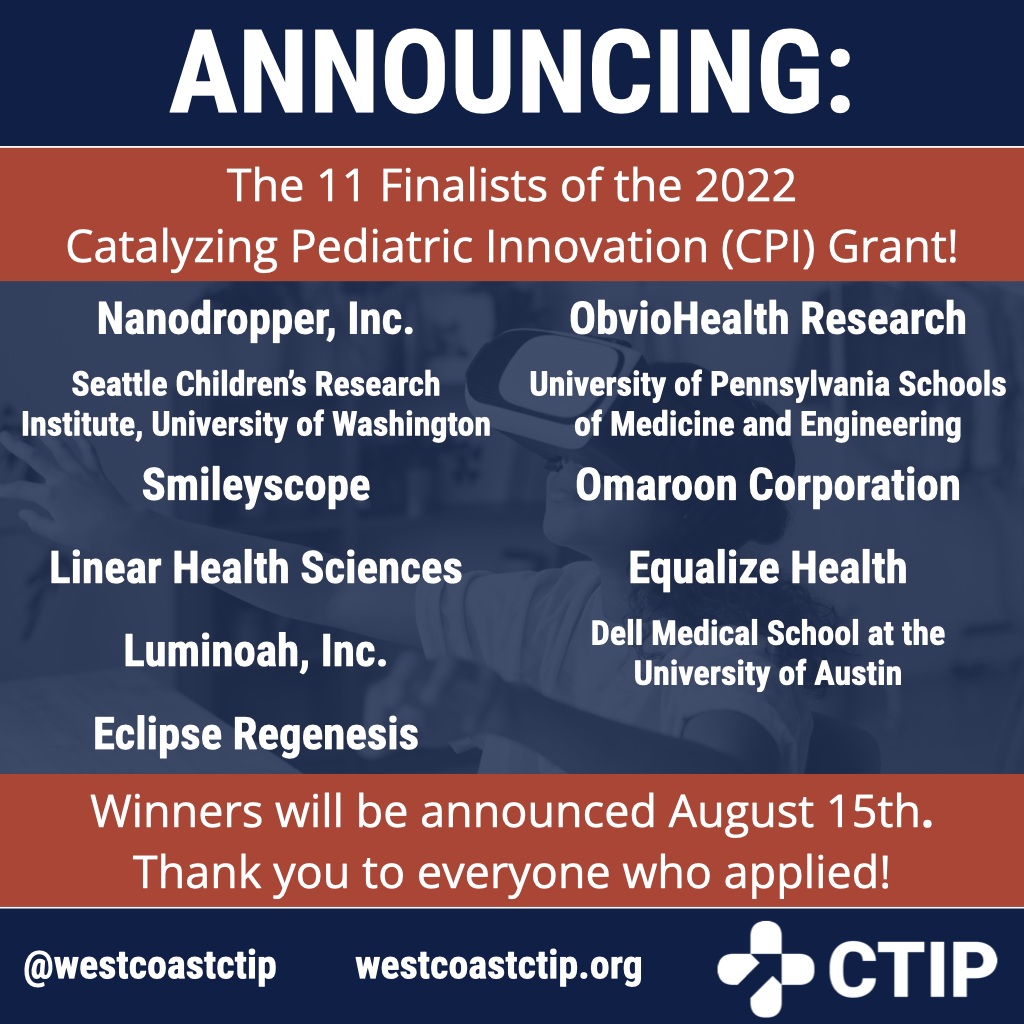 LOS ANGELES, CALIFORNIA - JUNE 13, 2022 - Now in its sixth year, the CTIP Catalyzing Pediatric Innovation Grant remains competitive. CTIP received numerous Letters of Intent for our 2022 Catalyzing Pediatric Innovation Grant and is excited to share the many innovative products and concepts submitted for application in the pediatric medical device space.

CTIP is committed to diversity, equity, and inclusion. We believe in supporting individuals from diverse and historically underrepresented backgrounds in the fields of science, technology, engineering, and business. By application, members of the company’s founding or executive team (for example: CEO, COO, CFO) identify as:

The Nanodropper is an eyedrop bottle adaptor that creates smaller eyedrops, or microdrops, which have been shown to minimize the incidence and severity of side effects relative to standard drops.

Smileyscope™ is a leading pioneer in virtual and augmented reality (VR/AR) therapeutics focused on managing pain, anxiety, and mental health for patients.

The Orchid SRV™ connects via standard luer-locking connection, allowing flow during IV therapy. The Orchid SRV™ is designed to allow the device to separate into two halves when excessive tension acts on the Orchid SRV™, automatically closing the flow path to both IV extension set and IV administration set. Following separation, a component of the Orchid SRV™ is left attached to each side of the infusion system to protect the intraluminal pathway. Upon separation, replacement of the SRV™ is necessary. Follow institutional policy to replace the SRV™, or at least every seven (7) days.

The enLumin is a portable, intuitive, and connected enteral feeding system designed to transform the lives of those who require supplemental nutrition.

The Eclipse XL1 Distraction Enterogenesis System utilizes a mechanical device to stimulate the body to grow new intestines as a treatment for short bowel syndrome.

Our multidisciplinary team is building a novel implantable muscle replacement that harnesses intrinsic peripheral signals in order to restore facial movement for patients with peripheral nerve and muscle disorders.

A Next Generation Solution for Optimizing Monitoring and Ventilatory Support in the Sick Newborn.

Omaroon is addressing an unmet need of phenylketonuria (PKU) treatment by enabling patients with PKU to rapidly monitor their blood phenylalanine levels.