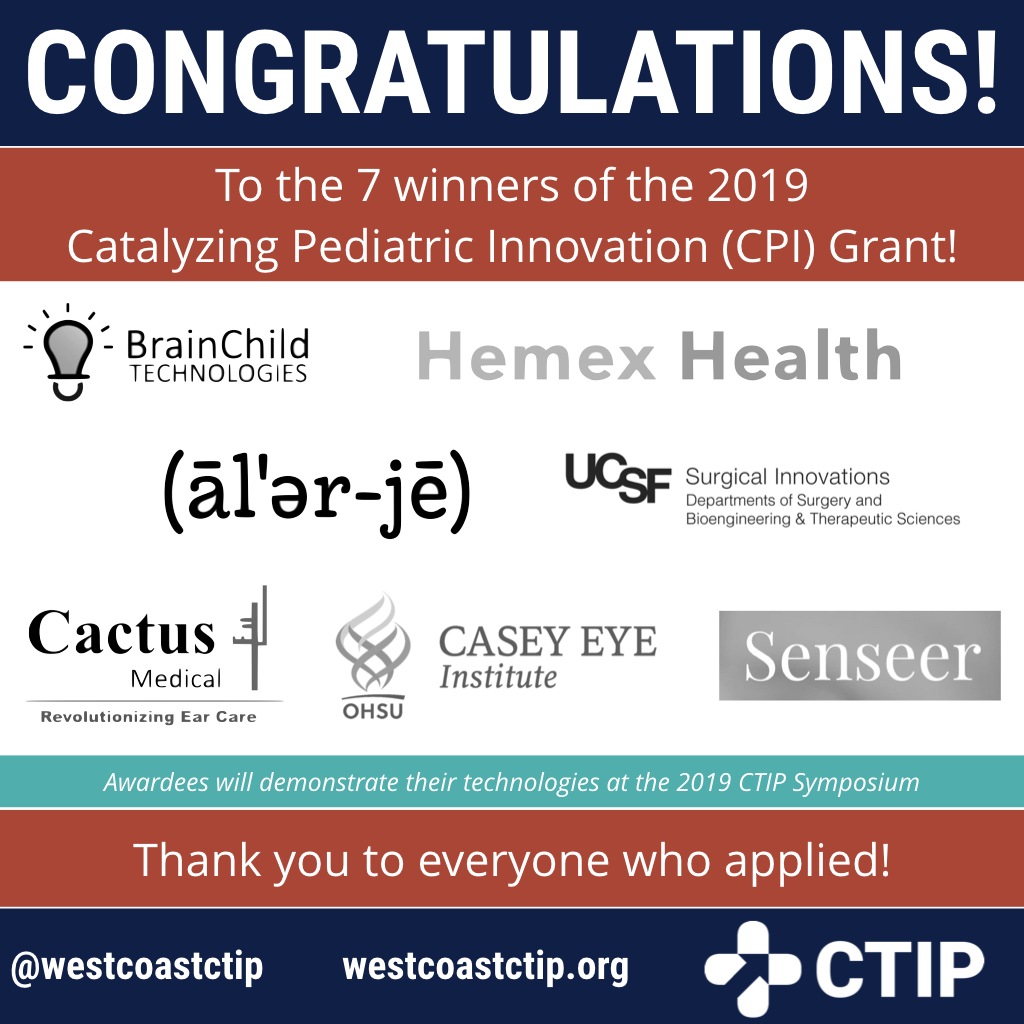 LOS ANGELES, CALIFORNIA - SEPTEMBER 5, 2019 - The West Coast Consortium for Technology & Innovation in Pediatrics (CTIP), centered at Children's Hospital Los Angeles, awarded $250,000 in seed grants on August 1, 2019 to accelerate projects specifically designed to improve the safety and delivery of care to infants and children.

Pediatric patients have long been an underserved population in the technology space, with many having to deal with ill-fitted medical devices and a lack of access to effective diagnostic or therapeutic devices. CTIP aims to address these unmet needs.

“This was our most competitive innovation competition to date,” said Kathryne Cooper, MBA, Co-Director of CTIP. “With over 100 applications of diverse and transformative healthcare solutions reviewed, we were impressed by the caliber of these technologies and their potential impact on patient outcomes.” Applicants included device projects covering 18 different pediatric subspecialties (most common: neonatology) and all anticipated FDA device classes (class I, II, III and exempt). The 100+ applications were from 20 states, including 52 applications from California.

“Children are underserved in many areas of healthcare, and medical devices are no exception,” says, Juan Espinoza, MD, FAAP, Director and Principal Investigator of CTIP. “The CPI grant allows us to inject capital into innovative devices that can be game changers in pediatrics, but it also serves as a high profile mechanism to bring attention to this disparity in children’s health.”

All seven CPI winners will be demonstrating their technologies at the coming CTIP Symposium, The Los Angeles MedTech Ecosystem: Spotlight on Pediatrics on September 19, 2019 at Children’s Hospital Los Angeles. “Being in Los Angeles, CTIP resides in a budding epicenter of innovation for our children’s future and a solid place for pediatric innovation within MedTech,” says Cooper.

Clinical research for breakthrough sickle cell diagnostic device - Hemex Health has developed an affordable, accurate, and compact testing platform (Gazelle™) for the millions of people who are at risk of malaria and sickle cell disease and lack access to viable diagnostics. www.hemexhealth.com

MiniMagnamosis: Transforming Neonatal Esophageal Atresia Repair - UCSF Surgical Innovation within UCSF’s pediatric surgery division has created tiny, specially shaped magnets that form a magnetic compression anastomosis to provide babies born with esophageal atresia with a continuous esophagus, allowing them to eat and drink on their own for the first time. www.surgicalinnovations.ucsf.edu

OmniJect - Alerje, Inc. is building an IoT phone case that holds a slim epinephrine auto-injector that when used during emergencies, alerts a users CareCircle with location info via a mobile app. www.alerje.com

Preclinical study for dynamic monitoring of VP shunt status using patented implantable microsensors - Senseer LLC is developing a multi-sensor module, MultiSense, that can be put in-line with already approved, implantable devices such as catheters or shunts, ultimately allowing for remote monitoring of device performance and, with that, timely intervention before severe and costly-to-treat symptoms arise due to device failure. www.senseer.us