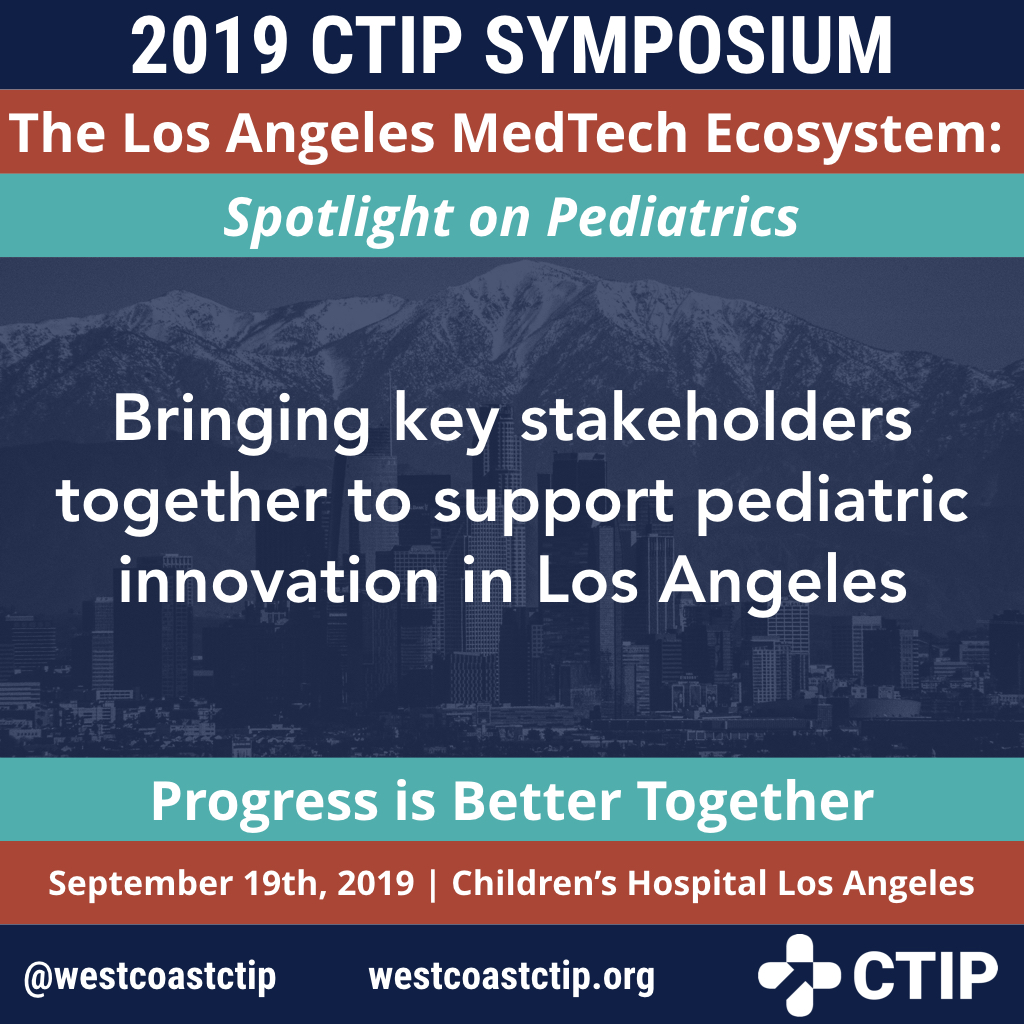 LOS ANGELES, CALIFORNIA - SEPTEMBER 20, 2019 - The West Coast Consortium for Technology & Innovation in Pediatrics (CTIP) held its 2019 Symposium, The Los Angeles MedTech Ecosystem: Spotlight on Pediatrics on September 19, 2019 at Children’s Hospital Los Angeles (CHLA) hosting over 150 tech leaders, entrepreneurs and healthcare leaders from across the country. This is an annual event that represents the Los Angeles convening of innovators, clinicians, entrepreneurs, engineers and wayward thinkers.

Attendees, partners, and sponsors were shown insights into devices, data, investing, and innovation through panel discussions, presentations and networking.

“Each one of my panelists finds value in something that others may not whether it be underrepresented founders, bioscience as an economic industry cluster or assessing startups entrepreneurs for investment not only by the potential they have to create revenue but also to make a positive impact and change in the world,” said Kathryne Cooper, MBA, Co-Director of CTIP and head of CTIP’s investment where she manages a $6.6M seed fund, during the Impact Investing panel. “The diversity in Los Angeles today reflects what the United States will be in 2050. That is an arbitrage opportunity for Los Angeles as an ecosystem, which includes MedTech.”

Dr. Juan Espinoza, Director of CTIP & Assistant Professor of Clinical Pediatrics at Children’s Hospital Los Angeles and the Keck School of Medicine of USC, encouraged the audience to “think about why we do this [at CTIP]” while displaying a black and white photo of his now five month old daughter Sofia. “The thought that she might one day need a technology that she does not have access to because of the barriers that we discussed today is unacceptable to me. And I bet that if it were one of your children who did not have access to those technologies, for the reasons we’re discussing today, that would not be acceptable to you. And if that’s the case, I think it is fair to say that it is not acceptable for any child anywhere, to face those barriers. And so that’s why we do what we do at CTIP.”

The winners of CTIP’s 2019 Catalyzing Pediatric Innovation (CPI) grant, each awarded at $30,000-$45,000, demonstrated their technologies to an audience of over 100 attendees. These seven innovators are creating novel solutions for pediatric patients in diverse fields:

Javier Evelyn, Founder & CEO, presented for OmniJect - Alerje, Inc. is building an IoT phone case that holds a slim epinephrine auto-injector that when used during emergencies, alerts a users CareCircle with location info via a mobile app.

Sascha Lee, PhD, MBA, CEO, presented for Preclinical study for dynamic monitoring of VP shunt status using patented implantable microsensors - Senseer LLC is developing a multi-sensor module, MultiSense, that can be put in-line with already approved, implantable devices such as catheters or shunts, ultimately allowing for remote monitoring of device performance and, with that, timely intervention before severe and costly-to-treat symptoms arise due to device failure.

Patti White, MBA, Co-Founder & CEO, presented for Clinical research for breakthrough sickle cell diagnostic device - Hemex Health has developed an affordable, accurate, and compact testing platform (Gazelle™) for the millions of people who are at risk of malaria and sickle cell disease and lack access to viable diagnostics.

The CTIP portfolio includes 77 companies, of which 37 are local to Southern California. To date, CTIP portfolio companies have raised $47,477,557 in follow on funding. CTIP distributed $525,000 in total funding in FY2019.

“Los Angeles is becoming something special when it comes to tech. We are working in pediatrics in a city that’s vibrant in tech. This is the right time and the right place to build the pediatric hub for health and innovation,” said Yaniv Bar-Cohen, MD, Co-Director of CTIP, Director of Cardiac Rhythm Devices at Children’s Hospital Los Angeles & Professor of Clinical Pediatrics and Medicine at CHLA and the Keck School of Medicine at USC, in the closing remarks.