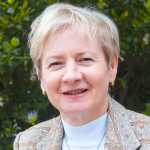 Dr. Frances Richmond was educated as a neurophysiologist (BNSc, MSc, PhD) at Queen's University (Kingston, Ontario). She completed post-doctoral studies at the Université de Montréal and the National Institutes of Health before joining the faculty of Queen's University, where she served as Associate Dean of Life Sciences (1986-1989). She also served as a policy advisor for scientific labor needs at Industry Canada (1990-1992) and as a clinical scientist at the Alfred E. Mann Foundation, an early stage device development group (1994-1995). She was the first female to be appointed Director of a research consortium funded by Canada's Medical Research Council (1995-2000). Dr. Richmond joined the faculty of USC in 1999 as Director of Regulatory and Clinical Sciences at theAlfred E. Mann Institute where she served for 8 years. Her work there included seven projects in the field of product development which have advanced through the clinical trial stage. Though focused mostly on the BION, an implantable wireless microstimulator, she was also involved in research on other implantable, sensors and prosthetic limbs. Dr. Richmond is or has been a member of three large research consortia (NIH Engineering Research partnership, NIH Bio engineering Research partnership, Clinical and Translational Science Institute). She directs the Regulatory Knowledge and Support group of the CSTI for the Los Angeles Basin.